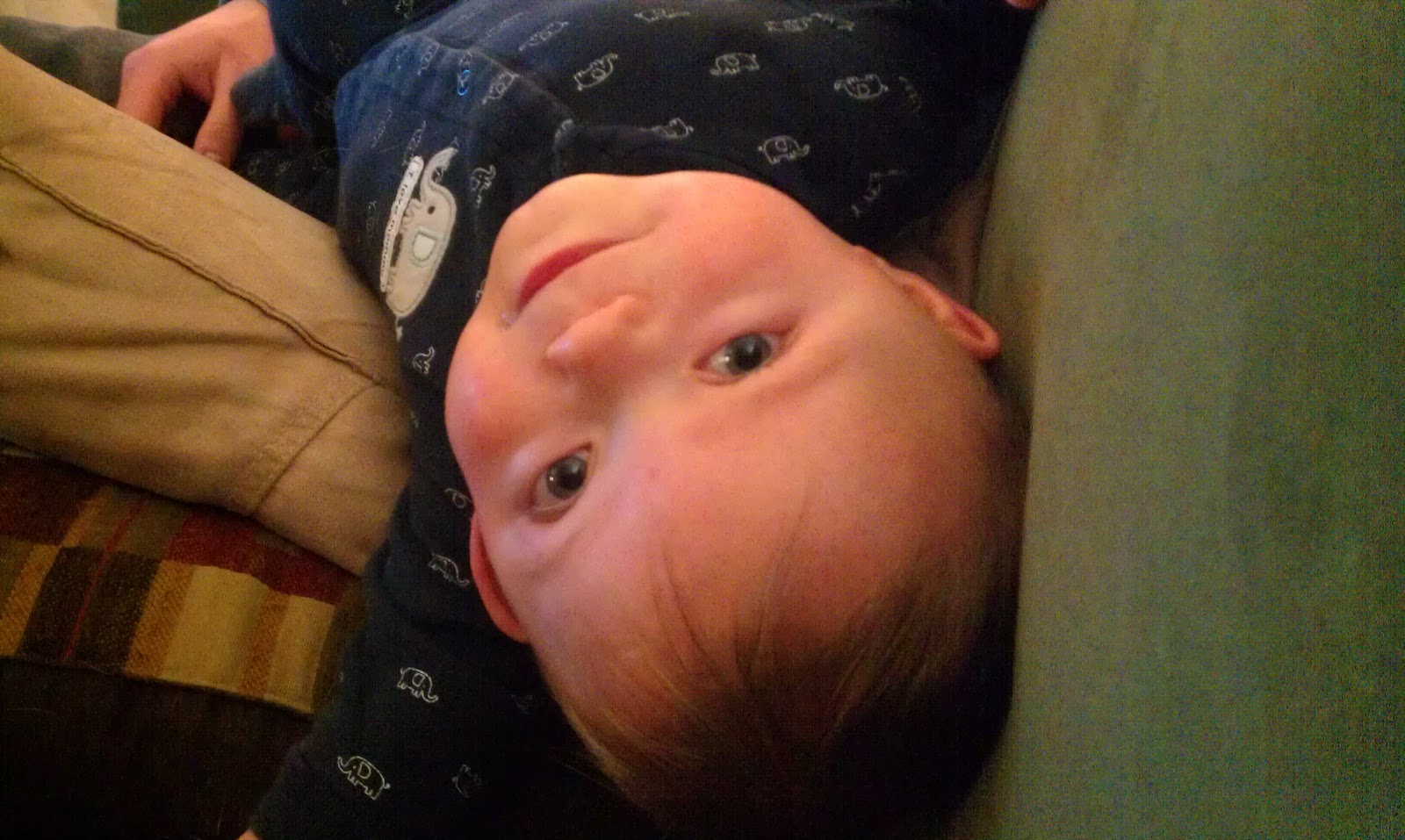 From the last post, I know most of you are expecting pictures of Finnegan with his new hearing aid... 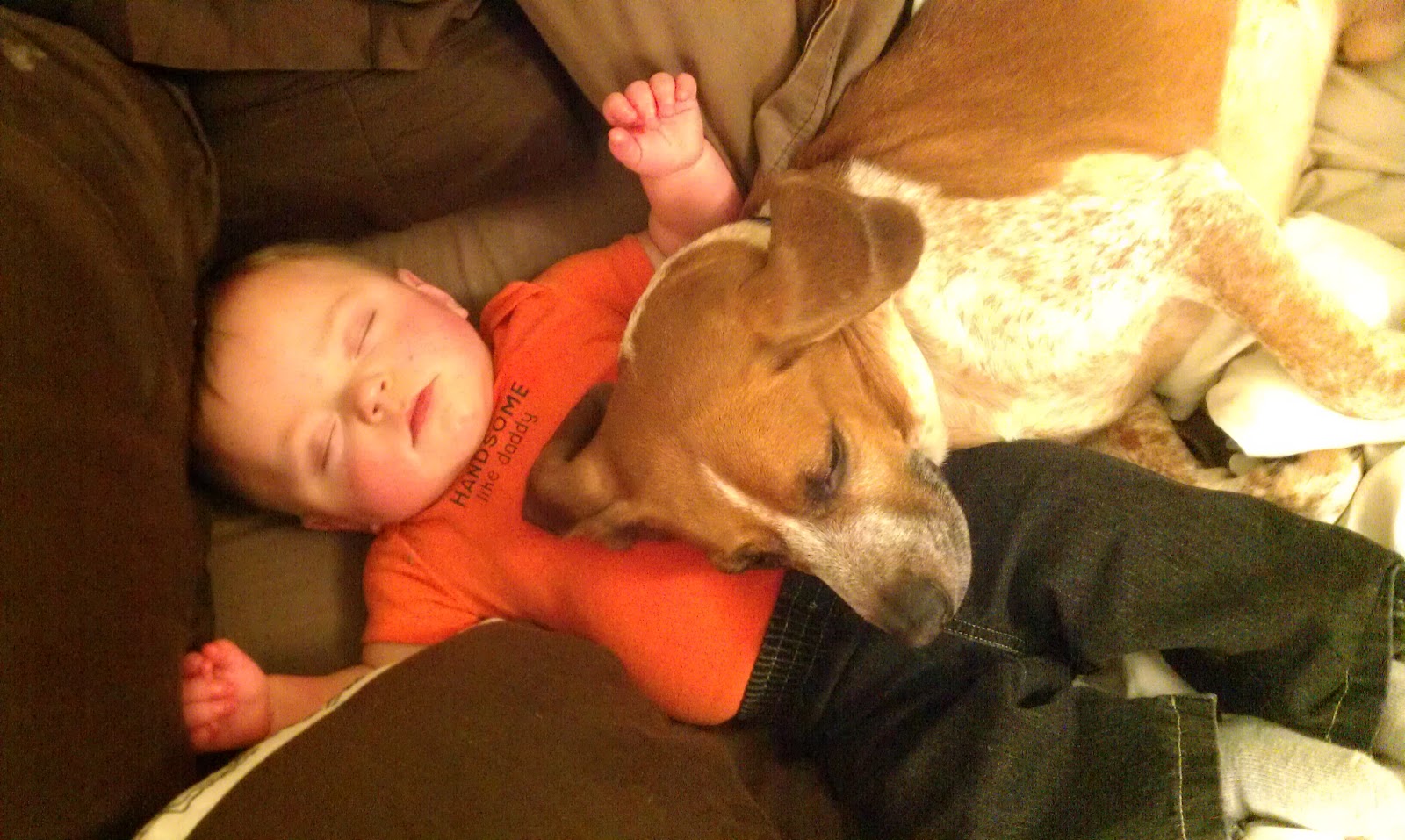 Well... We don't have one yet. Finn was supposed to have his hearing aid fitted about two weeks ago, but his audiologist had pneumonia, so the appointment got postponed. The day after the cancellation, Finn had a followup appointment with his ENT to check on his laryngomalasia (the condition he has that is an immature piece of cartilage in the larynx that vibrates and makes him sound wheezy...that he will grow out of by the age of 2). The audiologst's office requested that since he was going to be seeing his ENT, to get a clearance from him saying that it would be okay for Finn to get the hearing aid in his left ear. Dr. Russell was very hesitant at first. He didn't seem to be very excited about the prospect of a 10 month old getting a hearing aid (which was contrary to most of the "experts" we have spoken to). I told Dr. Russell about the therapists we talked to, the audiologists, etc., and said that we want him to have an aid if it will in fact help him hear more clearly out of that ear. He didn't seem to agree, but at least he seemed to be respectful of our decision for our son. I really like Dr. Russell, so his persistence was a bit off-putting, but at least I was able to explain to him our wishes for our son.


After looking in his ears, the doctor ordered a pressure test. He explained that in this test, they simply put a puff a air in each ear and it will determine if there is fluid behind his eardrum and how much. An audiologist in the office took us down the hall to a quiet room to do the test. It took all of 30 seconds, and Finnegan just kept staring at her and trying to grab the cord that was dangling from her wrist. 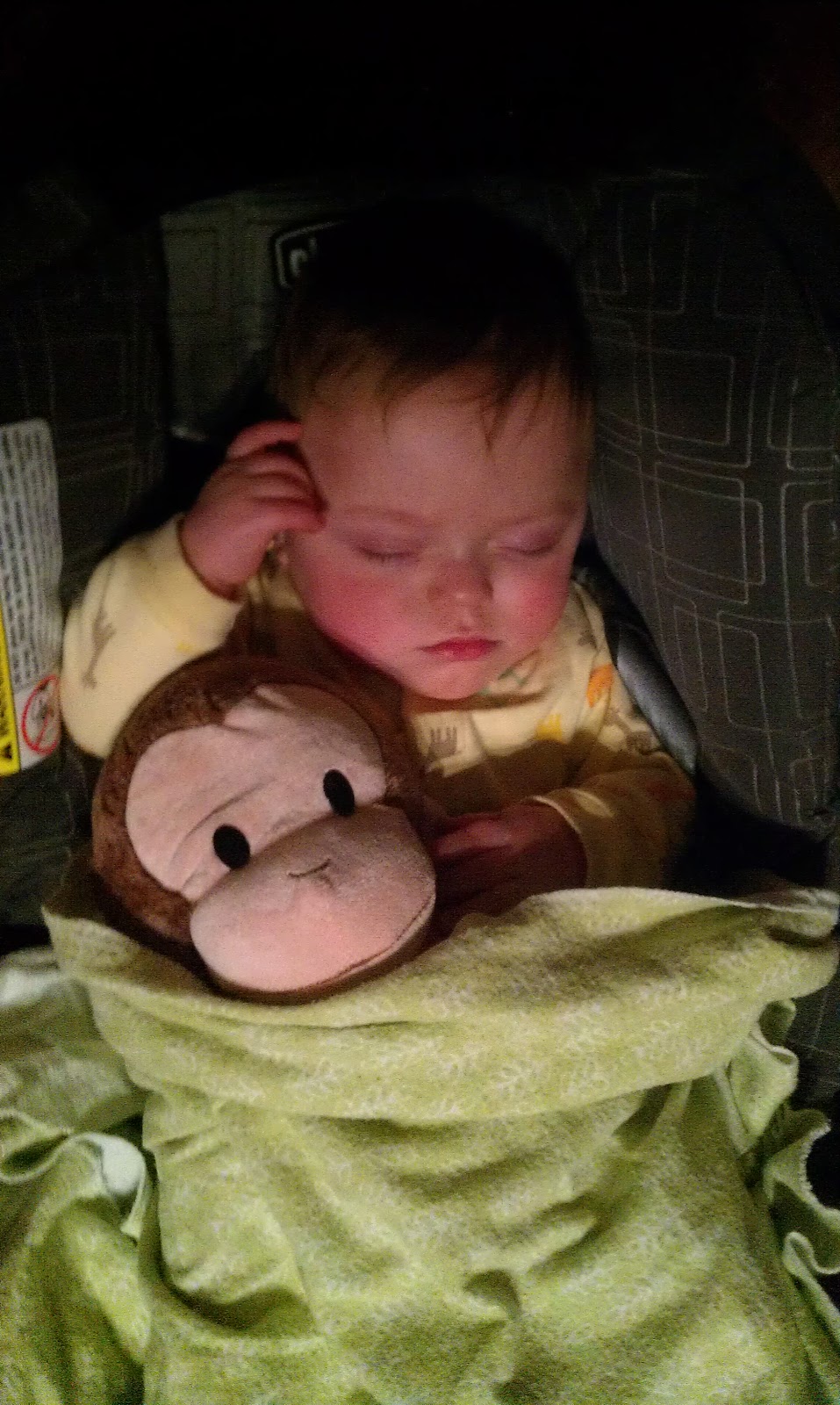 She brought us back to our room, where Finnegan decided to entertain all the nurses and patients by yelling... loudly. It was absolutely adorable, but man does he have a set of lungs on him! After waiting another five minutes or so in the room, Dr. Russell came back in with a big smile on his face. He said that Finnegan might not even need a hearing aid. The pressure test showed a significant amount of fluid behind his eardrums. This fluid could be putting pressure on his eardrum which is stopping it from vibrating at the correct frequencies. He suggested that Finnegan get in soon to have the fluid drained and tubes put in. He likely will only need one pair of tubes, but some babies (like his daddy) may need another set as they get bigger. He said he would have to take a look at his latest ABR hearing test results to be sure, but he thought that Finnegan might not need a hearing aid at all.

Once we got the ABR results to Dr. Russell, one of his nurses called to say that he didn't think the tubes would correct his hearing 100%, but that it would help. The nurse said that he would want to wait to get another hearing test done, but Ian and I both agreed that as soon as he is finished healing from the tubes procedure, we wanted to have another ABR hearing test done. Our hope is that enough of a difference is made with the tubes procedure that there would be a need for a hearing aid at all, but we are prepared for either outcome. I'm also prepared to find another ENT if necessary, although I don't think it will come to that. He goes in tomorrow (April 2nd) to get the tubes in his ears. It's a very simple procedure. We have to be there at 6:15am, procedure at around 7:15, recovery by 7:30, and out by 8am. At least that's the plan! Lucky Ian will get the spend the day with Finn, while I get to spend the day at work!

Finn went in for a consult with the Hanger clinic in Peoria for a cranial othotic (helmet). We have to go to Peoria for the scans because the Normal clinic does not have the equipment there. He goes in again in tomorrow for another scan (it's called a STAR scan...they put a sock on his head and he sits in the middle of a bunch of machines and it takes about 3 seconds for them to get a clear picture of his head shape). This scan will be the "head shape/model" they will use to design his Hanger helmet. The specialist that met with Ian and Finnegan in Peoria will be the same specialist that Finnegan will work with at the Normal Hanger Clinic, so that was a definite plus! The specialist said that she doesn't think we will see a 100% improvement in his head shape, but it will definitely stop it from getting flatter and will help make his head rounder...the degree to how much it will help is unclear at this point, but we know any improvement will make it more than worth it. His light blue helmet will be delivered next Tuesday (April 9th).

Finnegan continues to develop and impress his therapists. Just this evening, Finnegan had his weekly session with his Physical Therapist (every other week we meet his therapist at SPICE facility for sessions and on those opposite weeks Finn gets his sessions at daycare) where we constantly heard how happy his therapist was with Finn's progress. He is getting a lot stronger and is just changing so fast! Throughout the course of the weekend he has just overwhelmed us with new changes: rolling over (from belly to back), looking out the window in the car, bouncing and kicking everywhere (which is not a really new development, but it's picked up in frequency), reaching for things, clapping/banging toys together, attempting to catching himself if he feels off balance, crying when he can't get what he want, waving at strangers who wave at him, waving at himself in the mirror... I mean this was a pretty awesome weekend of Finnegan development!

His therapist is still concerned with his knees. His right knee especially is a bit tight (which is problematic when we're looking at having him stand and kneel with support more often). It is something she has noted for several months and expressed tonight that she wants to get a doctor's opinion before we do anything more with standing/kneeling. His therapist wants to make sure there isn't anything wrong (a calcification or anything else). We will talk with his doctor tomorrow, but it will likely mean an x-ray that will show if there is anything to be concerned with. If there is a concern, we will have to go see an orthopedic specialist to figure out what's going on, but if all is well we have a couple options for therapy to stretch those muscles in his knees. One option is a stander which looks kind of like a torture chamber, but allows Finnegan to be in a secured and safe while practicing standing. Finn will be strapped in a couple different ways and extend/flex/stretch his knees and allow him to put weight on his legs at the same time. The neat part is that it has a tray that clips on so Finn can play while "working". We would likely start with 20 minute sessions once a day and build up if he tolerates it.

The next option (which is probably what we will start with at first) is splints. These are just padded "braces" that go around his leg and provide a little stretch for his knees. He will wear them about 20 minutes a day to start as well. For these, he can stand, sit, lay down, wear them during naps, etc.

If improvement is not seen, there is an option of getting a series of casts that will provide a prolong stretch for his knees. The casts would only have to be on for about 5-7 days at a time, but we're hoping we will see results with either of the two previous options barring any findings in the x-ray of his knees.Beyond that concern, Finn is thriving and just keeping Ian and I on our toes. While he's not mobile, he's definitely vocal!

We did have one step back... his feeding therapist came for an evaluation and said Finn isn't ready for stage 3 foods with the chunks of solids or small bits of big kid food. So, we are just taking a little hiatus from those for right now. We also may have to continue keeping him on formula (as opposed to switching him to milk) because he may need the extra calories, and the therapist doesn't know whether his tummy can handle it yet, since he is "technically" only 8 months old. We'll continue to work with her and Finn to help develop those skills. Interestingly enough, feeding development goes hand-in-hand with gross motor skills, so as Finn continues to get stronger and explores more with rolling, sitting up, crawling, etc., his feeding skills should also begin showing more. 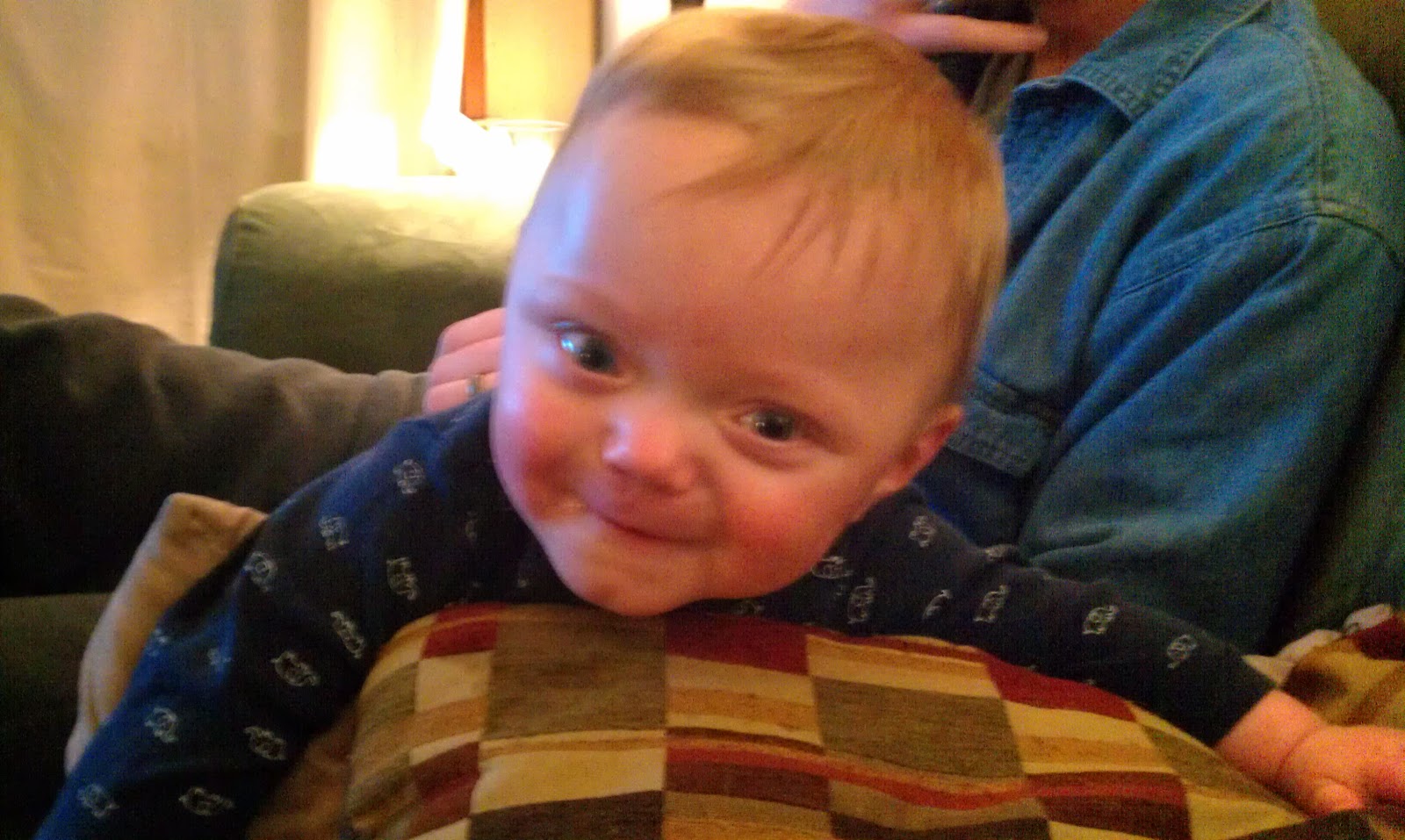 I spent a lot of time this Lenten season reflecting on my little miracle and ways in which I can become the mom that God intended me to be. I spent a lot of Lent focusing on me: eating better, being more active, taking "me" time...and I have to say, I feel a stronger bond to Finnegan. I spent the first 10 months of his life just giving everything I had so that I had nothing left to take care of my self. That resulted in 15 extra pounds and an overall slump. Finnegan's successes helped lift the slump and, as a result, helped me realize how much I've let myself go. This Lent I decided to turn that around and to begin a process that I could extend throughout the rest of my life. I wanted to strengthen my bond with God and my family. I still have a long way to go, but I feel so much more connected spiritually and with my family. I'm so blessed. 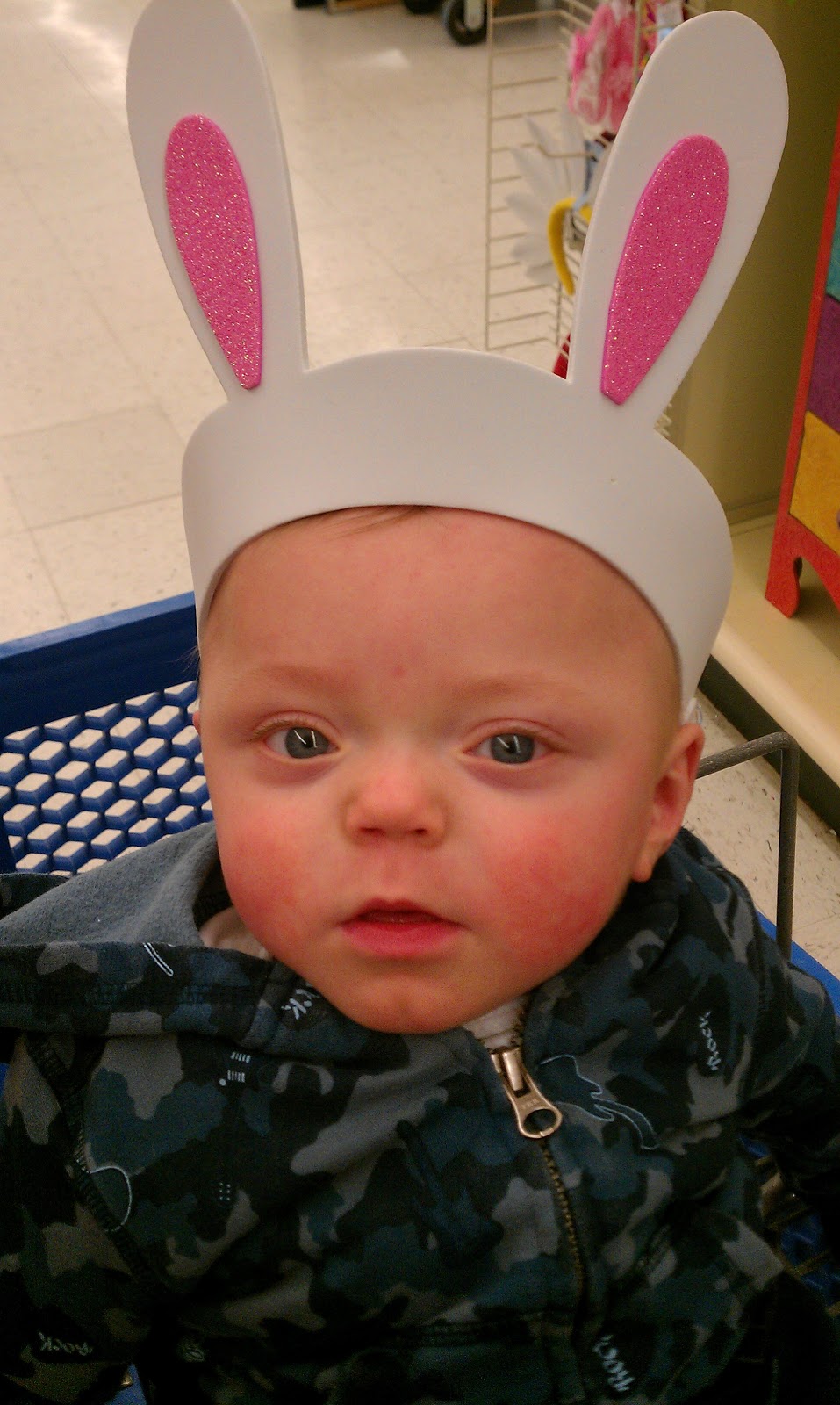